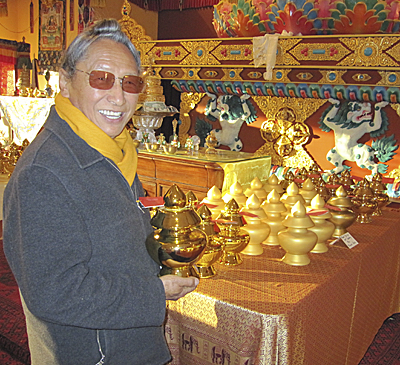 Lama Tharchin Rinpoché designed The Vajrayana Foundation’s beautiful Treasure Vase. The blessings, pacification and improved environment created by the vase are extended 15 miles outward from the vase’s location. By the sacred contents and rituals employed during its creation, the treasure vase has the power to magnetize wealth and abundance, improve health & healing, pacify anger & warfare, and increase wisdom and compassion.

Traditionally, Tibetan Treasure Vases are given on auspicious occasions such as births, weddings, housewarmings or new ventures. They are kept in one’s shrine, home, or business, or buried at a chosen site. The vases are the perfect remedy to restore vitality and harmony to elements (earth, air, fire, water and space) that are imbalanced, disturbed or depleted by environmental pollutants in this day and age. Within the areas surrounding the vase, direct experiences of well-being will occur.

“These are the same sublime vases we have offered in the past, however now they have a most significant and precious addition: Chu-ter, healing water from the spring in Eastern Bhutan which began to flow when blessed by Kyabjé Dungsé Thinley Norbu Rinpoche’s practice. This area on the mountainside near Rangjyung, Garab Dorje Rinpoche’s gompa, had a water problem for many years. When Kyabjé Dungse Thinley Norbu Rinpoché did puja there, the water began to flow again. Now this is a place where people come from far away and stay to camp and partake of the healing water. From showering in and drinking this water, they become healed of many illnesses. It is this holy water which we have brought back from Bhutan and infused into the medicinal clay used for rolling the balls which fill each Treasure Vase. These vases and this practice are a direct link to His Holiness Dudjom Rinpoche’s wisdom mind, a true wish-fulfilling jewel. ”

Watch a video about our Treasure Vases here.